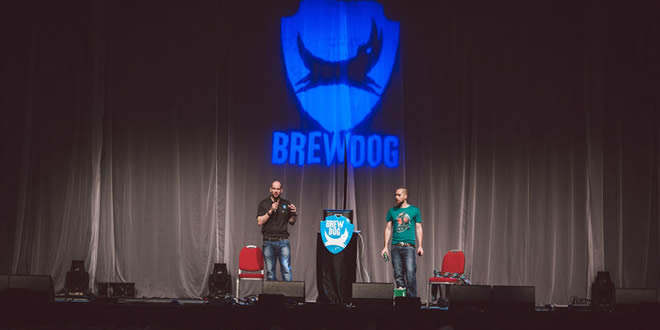 Q: What do you get if you cross a beer festival with a street food event and a rock/pop concert?

Okay, there was about 45 minutes of an actual business presentation too, but in typical BrewDog style they’ve turned what for most companies is a boring corporate event for shareholders into a beer fuelled party.

This year for over 6,000 people, making it the UK’s largest ever AGM. 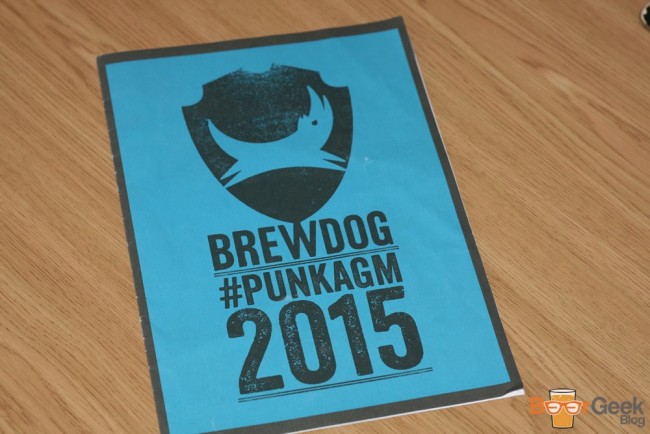 As a new shareholder in their latest round of Equity For Punks fundraising I was entitled to attend the fifth-annual AGM, I’d heard about the fun had at previous years events and wanted a taste of it.

I arrived at the venue – Aberdeen Exhibition and Conference Centre – with a slightly sore head after visiting the BrewDog brewery and DogTap followed by some of the best bars in Aberdeen the previous night. 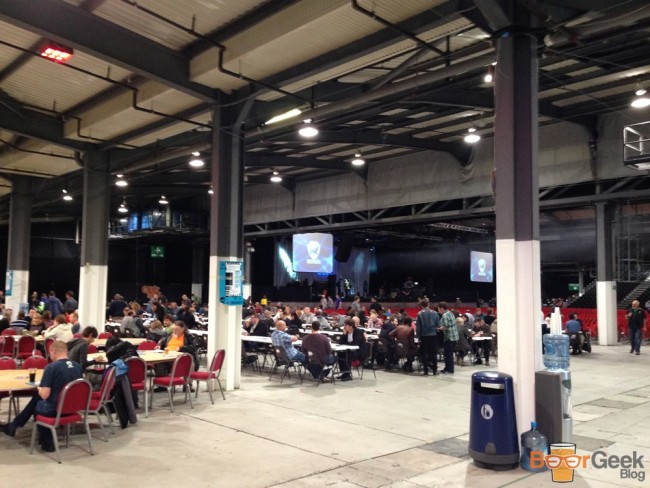 After grabbing a programme and my first lot of tokens – at a cost of £10 for six tokens with beers (served in pint, 1/2, 2/3 or 1/3 depending on ABV) costing two or three tokens each – I took a seat and quietly nursed a couple of halves. 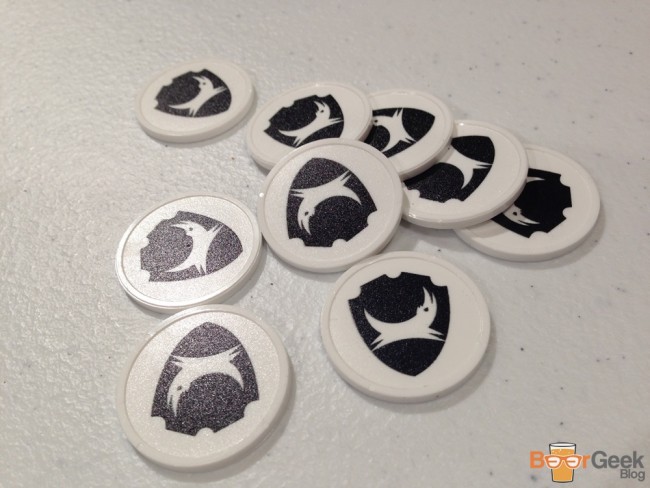 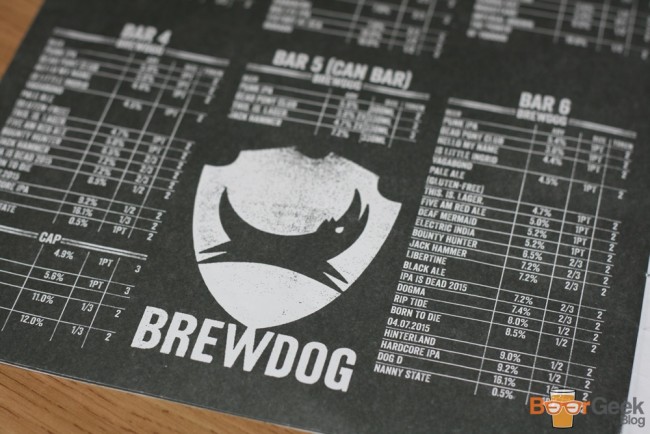 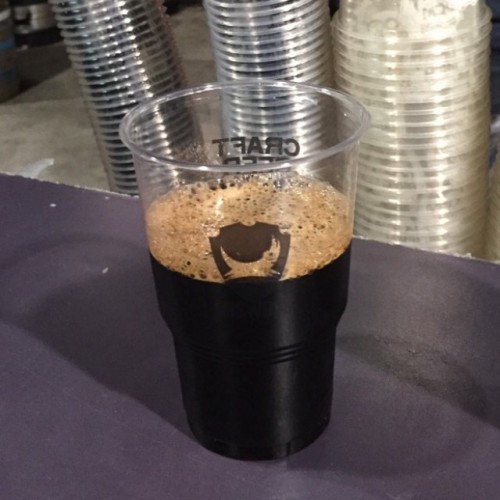 It turns out quality beers from the likes of Mikkeller, Ballast Point and of course BrewDog themselves makes for a great ‘hair of the dog’. It wasn’t long before I was back to my best.

The actual business update was far more interesting than your average AGM presentation. It started with James and Martin receiving a reception that wouldn’t have been out of place at a rock concert.

They’re confident presenters and have bags of charisma and personality, something I already knew from watching all three series of their US TV show ‘BrewDogs’.

They began with a bit of company history.

Followed by some slightly less interesting albeit rather impressive financial results. 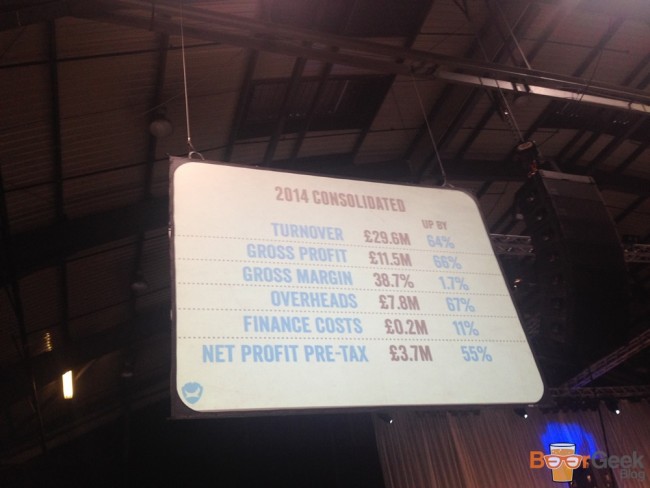 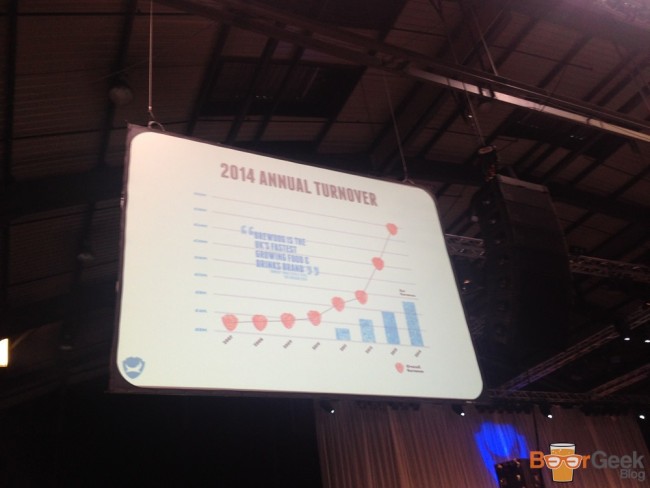 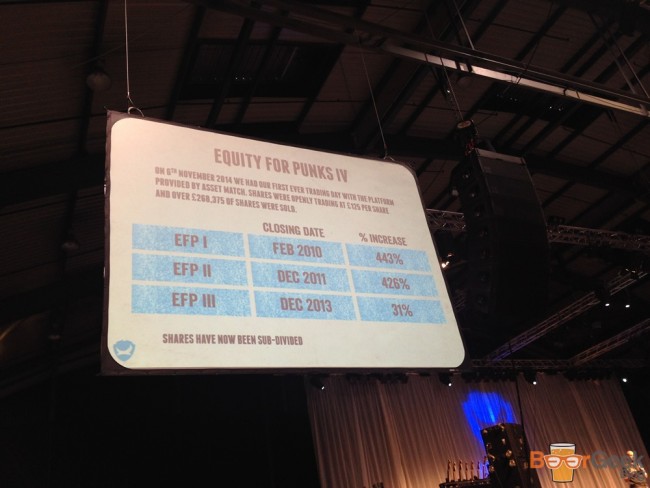 I may be partially responsibly for the increase in sales of Punk, but who’s buying all the Gem? 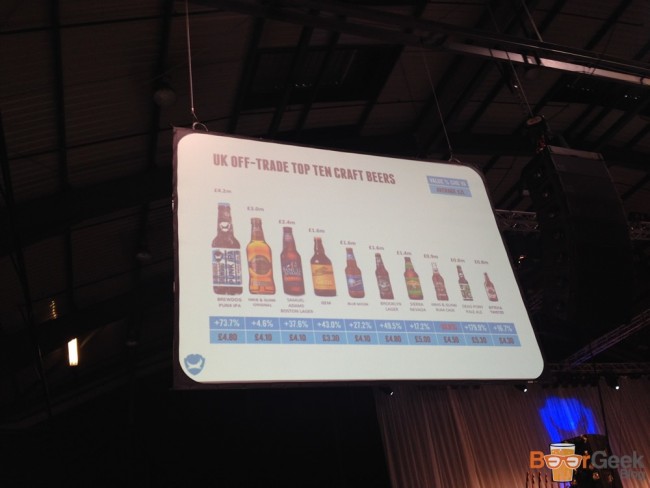 Far more exciting was news of their huge brewery expansion and of upcoming bars and some brand new concepts. Including a full restaurant and bar called DogHouse and a craft beer and hot dog joint Dog Eat Dog.

And even a hotel or B&B (Bed & Beer) provisionally called The Kennel. 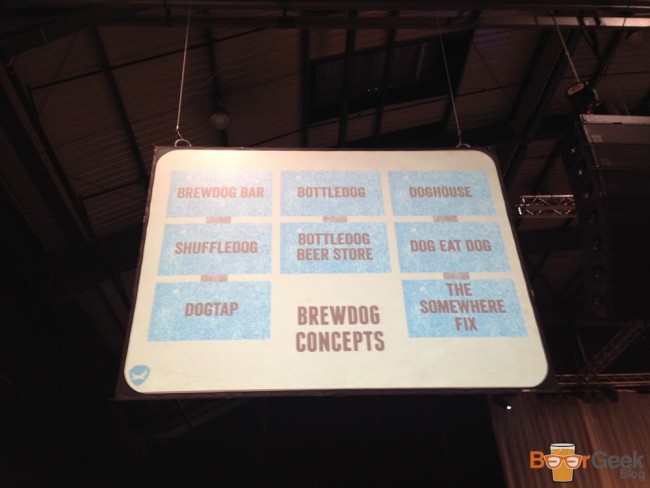 There was announcements of new beers too: I’d been waiting for Jack Hammer in cans for a very long time and am very much looking forward to the Beavertown and Ballast Point collaborations becoming available. 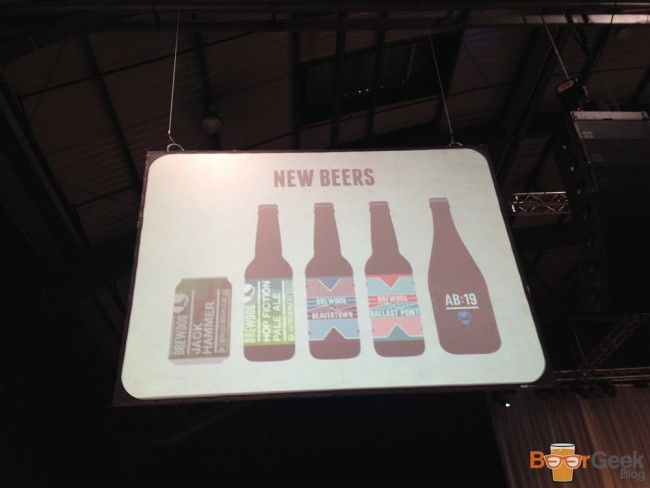 I genuinely enjoyed the updates; there was a lot of laughs, Jack Hammer cans thrown to the crowd and a couple of Steve Jobs references for the tech geeks amongst us.

But with the business stuff out of the way it was straight back to the drinking. 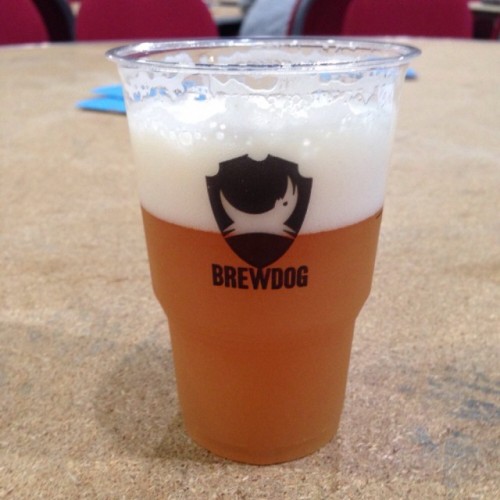 The standard of beers available at the six bars was exceptional. BrewDog’s offering covered all the usual suspects right up to ‘Born To Die’ and the brand new ‘Dog D’. ‘Hinterland’ even made a very brief appearance at one point.

But it was the guest bars where I spent most of my time. An amazing selection of beers from two of my favourite breweries Mikkeller and Beavertown along with two I didn’t know much about; U.S based Ballast Point and CAP from Sweden. 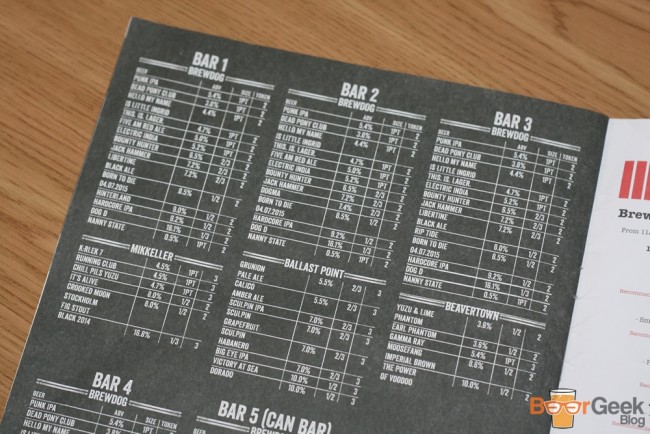 There were several tasting session’s from each of the breweries (and Brew By Numbers) too. 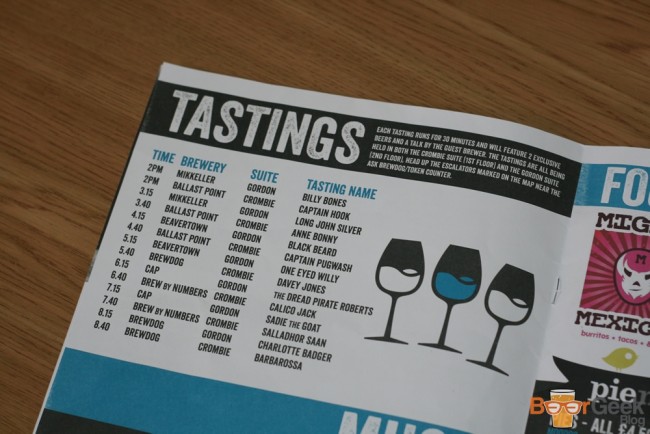 I attended a couple; at the first we sampled two BIG beers from Mikkeller.

The second tasting session was held by Beavertown founder Logan Plant who spoke passionately about his ever popular brewery.

The only negative was the BrewDog ‘Can Bar’. They were selling Punk, Dead Pony, This. Is. Lager and Jack Hammer (all of which were available on tap) but they weren’t allowed to give us the can, so poured it into a glass anyway, which seemed pointless in itself. To make matters worse the cans weren’t chilled and cost more than a pint from the taps. A bit weird that one.

According to Untappd I drank 20 beers, though it’s definitely at least 21, as I seem to have missed ‘It’s Alive!’ from the Mikkeller tasting.

Here are my favourites in reverse order. 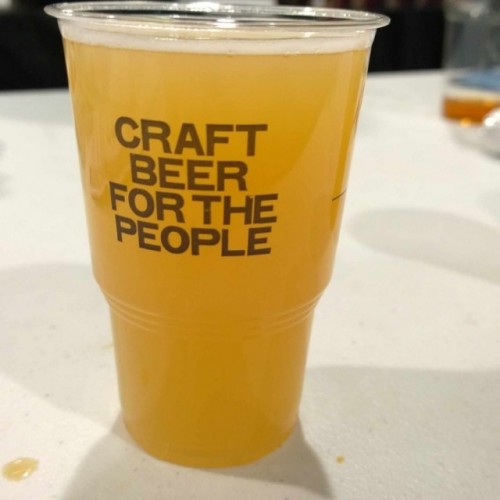 With so much beer consumption it was vital to eat regularly. Thankfully, unlike many beer festivals they had that covered too.

As a food blogger it was great to have decent options at an event like this. There was a choice of pies from Pieminister, tacos and burritos from Mighty Mexican and barbecue from Longhorns.

I started at Pieminister; the ‘Chick ‘N’ Hop’, a Punk IPA, chicken, ham and cheese pie topped with mashed potatoes, minty mushy peas, red wine & onion gravy, crispy shallots and grated cheese might not look pretty but it tasted brilliant and was exactly what I needed after so much booze. 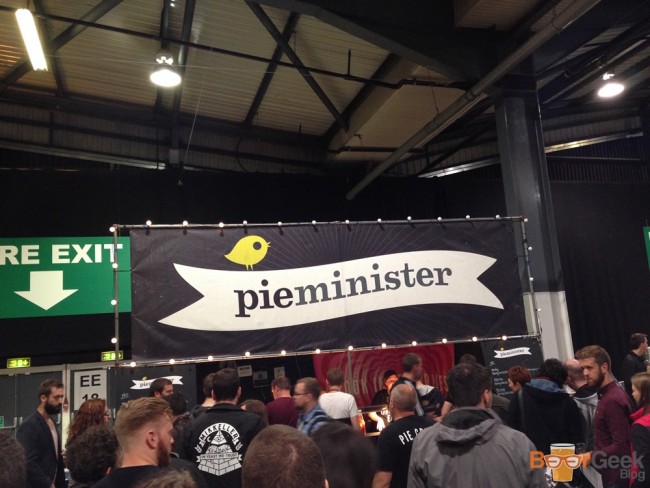 Equally good was the food from Longhorns BBQ.

Just as well really as I queued over 45 minutes for it!

Before the event BrewDog had alluded to huge queues at the bars last year, which they’d promised wouldn’t happen again. They were right but unfortunately the same couldn’t be said of Longhorns. 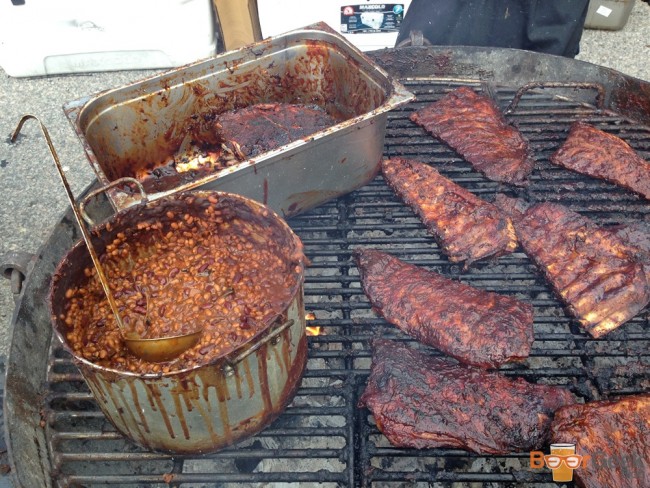 Still, the Memphis ribs were excellent and the BBQ beans just fantastic. 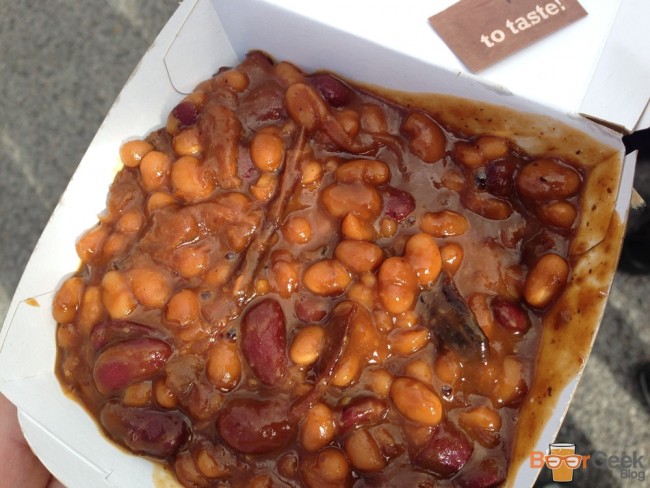 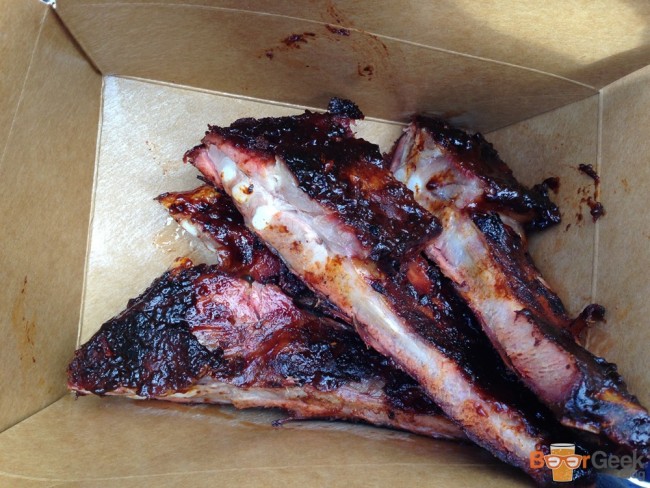 My only regret is not being able to write much about the music on the day. 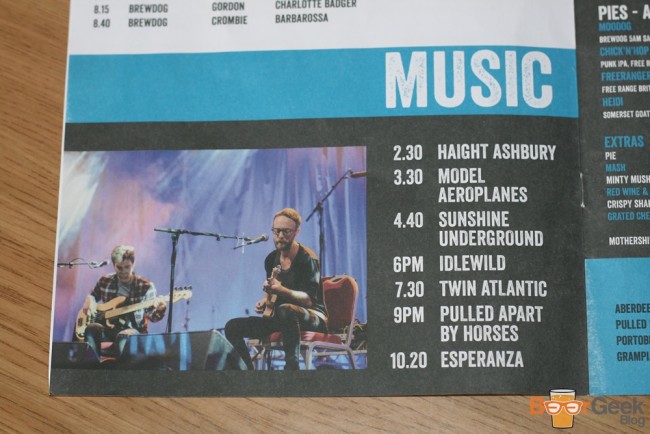 Much of the crowd treated the event like a proper concert but I was far too distracted with the beer to give it the attention it deserved.

I was genuinely looking forward to seeing Pulled Apart By Horses but ended up leaving just before they came on. 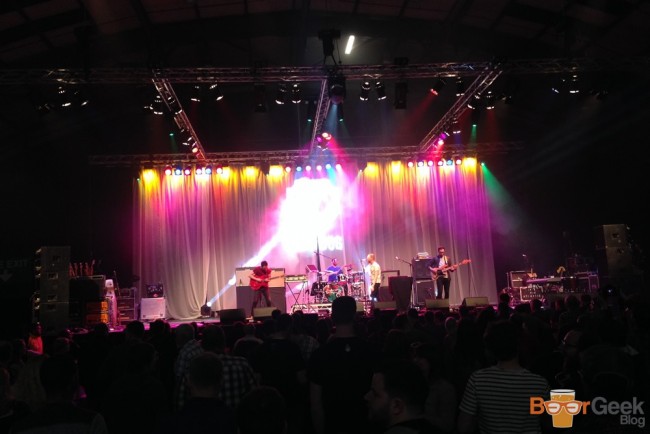 Before I left there was just time to place a ridiculously large order at the virtual online store. Some of the prices were incredible, most notably bottles of Mikkeller/3 Floyds barley wines for £9/each that sell for £30+ in bars!

Overall I thought the event was fantastic, well worth the 700+ mile round trip.

I drank many fabulous beers, ate some good food, met some great people and most importantly had loads of fun.

Considering over 6,000 people attended it ran very smoothly. I had few complaints other than the queues for food and the slightly odd can bar. 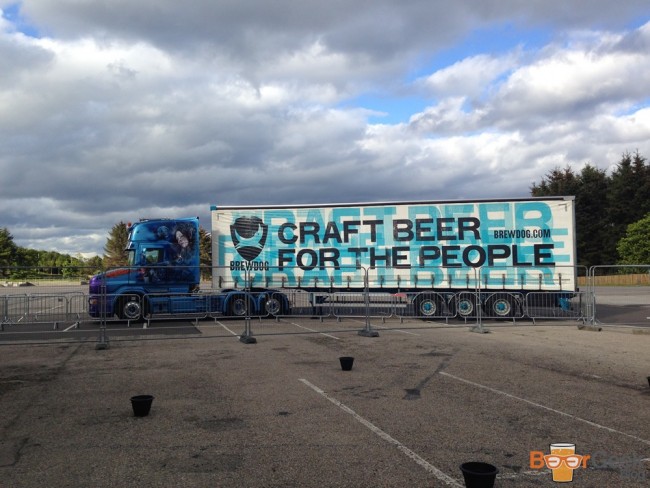 EDIT: After writing this epic post I came across this video from BrewDog which covers pretty much everything I’ve said in under two minutes. Sorry about that.

It’s well worth a watch even if you’ve read this far though.

Previous The Best Beers I Drank In… JULY 2015
Next dubfest 2015: Introducing ‘drink up brewing’